- Walking tour
- Meeting point: near the Icheri Sheher metro station (Old City)
The architecture of Baku, located on the shore of the Caspian Sea, is a successful combination of different styles, such as Gothic, Baroque, classical and modern styles.   The route covers the central part of the city with a display of the most interesting historical and architectural sites.
Tourists will see the building of the new Carpet Museum, design of which is distinguished by its originality - the museum is built in the form of a folded carpet, walk along the Baku embankment, view the facade of the Government House (former House of Soviets), Philharmonia named after M. Magomaev, the Baku City Hall, will visit the Governor's Garden.
The tour will continue in the Old Town, which has preserved both the fortress walls and narrow cobblestone streets up to this day.
On the territory of the Old Town, several dozens of historical and architectural monuments are concentrated, including the Shirvanshahs Palace (the 15th century), the symbol of the city of Baku - the Maiden Tower (IX century), caravanserais, mosques, etc.
Our today's excursion will end with a visit to the Upland Park.
The Upland Park is located on a hill in the western part of the city. This is the best place from  where you can enjoy an unforgettable view of the city and the Baku bay.
Price: 35 USD per person
Transfer from the hotel is not included into the price and depends on tourists number 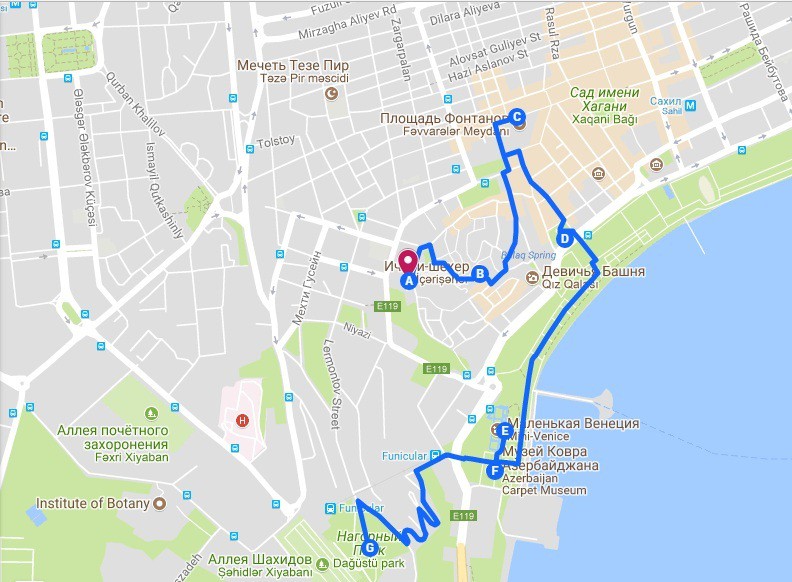