Excursion in "Ateshgah" and "Yanardag"

Excursion in "Ateshgah" and "Yanardag"
- Bus + Walking tour
- Meeting point: near the Icheri Sheher metro station (Old City)
Azerbaijan is one of the few places on the earth where even today one can observe the elements of the preserved fire cult and the ancient religion of Zoroastrianism. These places, where oil oozes out of the earth, and natural gas bursts outward with burning torches, have always attracted fire worshipers from all over the world. Baku, its oil, the "burning earth" have long been known far beyond its borders. The official religion in the states as Manna and Midia that arose in the 7th century BC was Zoroastrianism, the spread of which was associated with self-igniting sources of oil and gas. Therefore, there is such a monument as the temple Ateshgah, preserved to the present day.
The Ateshgah fire temple (literally the House of Fire) is located 30 kilometers from the center of Baku, on the southeastern outskirts of the Absheron peninsula.
Next, guests will have a trip to the village of Mahammadli.
Near this small settlement on the Absheron peninsula there is the hill of Yanardag (from Azeri, Yanar-burning, Dag-Mountain). And this mountain is really burning - not in the figurative, but in the literal sense of the word. Once upon a time there were many places in Absheron where natural gas, leaving the surface, self-ignited, but with the beginning of mass exploitation of oil and gas fields in Absheron, such places became fewer and fewer. Today, the only place of this unique natural phenomenon on Absheron  is Yanardag.
Price: 40 USD per person
Transfer from the hotel is not included into the price and depends on tourists number 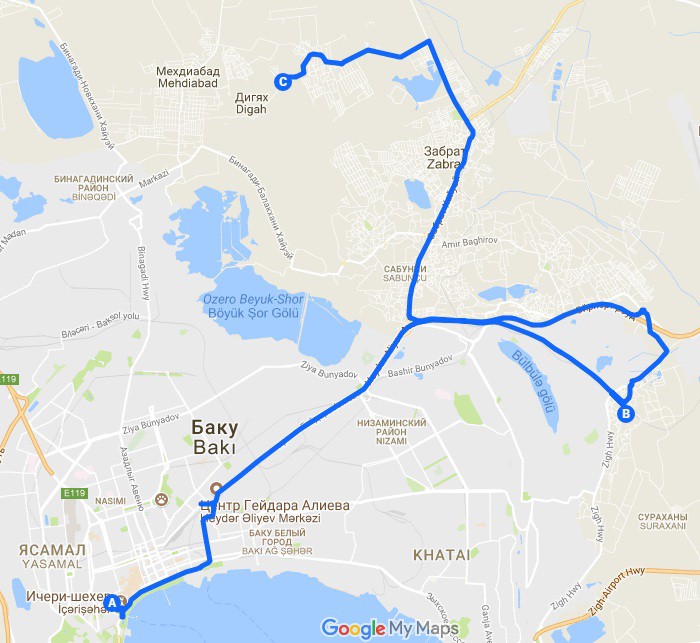